Born May 8, 1957, Catey Luna was raised in Evergreen, Colorado, where she began her interest and study of art at an early age. The daughter of a sculptor, she grew up in the studio. Catey began with a primary interest in two dimensional work, including painting, drawing and printmaking. She continued her interest in Art through high school, received a Bachelor’s of Fine Art in Painting, from Northern Arizona University and went on to study art at the Art Students League in New York City.

During her travels in Venezuela, Greece, Europe, Africa, around most of the United States, and now a 25 year resident of Washington State, Catey has continued to cultivate the images that she expresses in her artwork; developing a style which she terms “Magical Realism”. Catey uses the flora and fauna and rich depth of our abundantly beautiful Eternal Sacred Earth to create her pieces.

In the past 14 years Catey Luna has been sculpting in steel as well. Her medium is recycled car bodies, from which she creates Garden Sculptures, including mobiles, and larger, three dimensional sculptures, that continue to sustain the “Magical Realism” theme, which has been her life long journey. 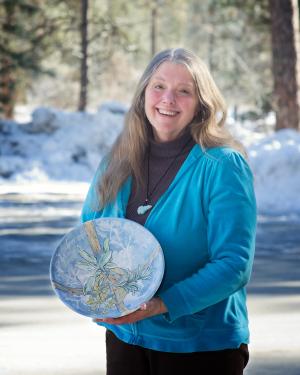 <  BACK TO PREVIOUS PAGE